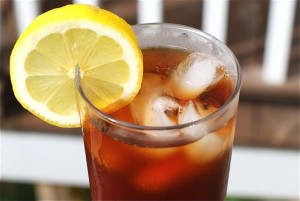 The invention of Iced Tea could be considered as more of a situation from losing profit during Americas 1st World Fair. The owner og an English Tea plantation Richard Blechynden decided to distribute free samples of his product when a heat wave hit. But obviously people would be looking for something to refresh themselves and hot tea wouldn‘t fit their needs. Then people discovered benefits of iced tea. Desperate Richard Blechynden put into the tea a lot of ice and that‘s how the first Iced Tea was born. As far as the people down south were concerned, tea was served cold but not iced. That’s the story how the idea about iced tea was born.

Originally iced (served cold) tea down south was served with a bit of sugar, only then benefits of Iced Tea reveals. It was Long Iced Sweet Tea and is still people enjoy drinking this beverage even up to this point. Nowadays Iced Tea in the US has a big variety of styles, everyone knows how to prepare Iced Tea. Some are not professionally artificial mostly sugar and flavoring, while others are the real thing, that’s why benefits of Iced Tea appears.

Usually tea used for iced tea is black tea. But the greatest thing to do next time is to look for a slightly different kind of tea, one that does not meet the standard. At least that would give the drinker something new. But the most important thing is to know everything about Iced Tea you are drinking.